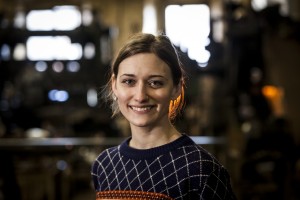 Julia had been doing both forging courses and carpentry courses. She is great at handicrafts, forging and organizing. It was nice to be able to offer her to work at Wetterling’s as help, both in the forge and in the office. When then-CEO Lars Jungefors dropped out, it was empty at the office – and Julia got to jump in as assistant and later as CEO. She has done well – so well that she was awarded a prize and a scholarship for her leadership from the Swedish Scout Movement and His Majesty the King of Sweden. This picture is from their webpage. Currently, she is on leave, studying business administration at the University of Uppsala, and owner Gabriel Brånby is temporary acting as president.

« Improving for better hosting visitors The Day of The Axe 2015 »