HOW WE MAKE THE AXES

Steel is iron that contains a certain amount of carbon.

The steel is purchased in various dimensions, three meter long rods, packed in giant bundles, where each bundle is weighing 8-10 tons. The steel comes from Ovako in Smedjebacken, and made to correct dimensions in the Ovako mill in Boxholm. Wetterling’s buys steel bars in five different dimensions. The steel is 100 % recycled scrap iron that is, under controlled processes, mixed to our specification, optimal for forging axes. The steel is based on the C55 carbon mixed with silicon, manganese and vanadium.

The steel rods are cut in pieces with the same weight as the eventual axe head – then forging begins. 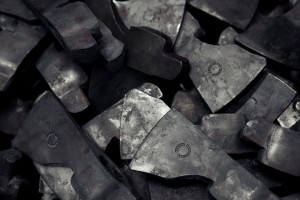 The steels optimal temperature for forging is about 1200 ° C – when it is yellowish red. The blacksmith must not heat the steel too much or for too long because the carbon in the steel burns out and the steel loses its beneficial properties – it can be difficult to cure and/or become brittle. If the steel is not hot enough, it is hard to forge and, at worst, it can destroy the forging hammer because it makes too much resistance.

At Wetterling’s we have four electrical high frequency furnaces (like a microwave oven produces micro-frequency waves, the HF furnace produces high-frequency waves). They are using induction to make the steel molecules move and quickly (in a few minutes) reach 1200 degrees centigrade. This is an effective and environmentally friendly way to heat steel. 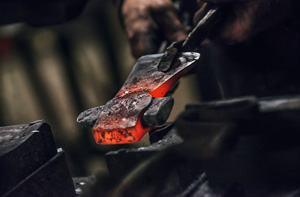 The actual forging is done in the old Arboga forging hammers (1920 – 1930’s) that has a solid base, “table”, equipped with a number of fixed “pads” and “tools” in various forms, and a top that is constantly moving up and down with several tons clout. The blacksmith have no control of the stroke rate – it runs at the speed it’s built. Given that fact, a good blacksmith has to follow the rhythm and he or she has to strike while the iron is hot. The upper part of the hammer has a number of special tools mounted to suit the axe model forged. 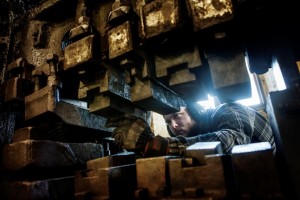 The blacksmith, using a “blacksmith tongs”, brings the cut and 1200 C ° heated glowing steel slab and insert it – and then quickly takes it out, every few seconds,  between the table’s cushions and tools, and the moving upper tools. The skill is for the Blacksmith to have the absolutely correctalignment between pads and tools. Step by step he or she beats the steel in the hammer and his ability to coordinate his movements is the skill to create a finished axe head. One of the hardest things in the blacksmith’s work is to get the ax straight and well balanced – and that the eye becomes perfect and sits exactly. The blacksmith controls the axe head’s proper shape. Using hammer and anvil the blacksmith can adjust the still hot blade so that it is absolutely straight and balanced before moving on to finishing. 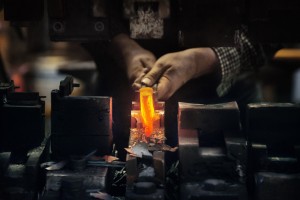 The last process to a finished axe head contains the following:

First the heads are roughly grinded, and then they get a finer grinding. The next step is heating the head again, with the help of high frequency (HF), but now only to slightly more than 800°C and only at the bottom of the head. 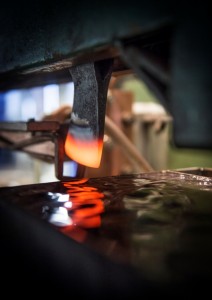 After a rapid cooling, in running tepid water, the axe blade is hardened. Then the heads are placed in a 195°C warm oven for about one hour. This last described procedure is called tempering. Tempering neutralizes any tension in the steel that may have occurred in the forging process. 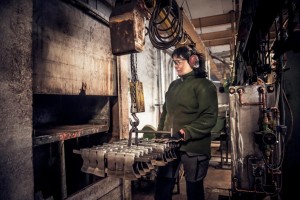 After hardening and tempering the front of the axe head has a hardness of 57 Rockwell C.

The edge should be razor sharp so it is polished and ragged. Ragged means that the edge is polished on a rotary buffing wheel of textile rags along with grinding wax. Finishing ends with oiling the heads to prevent future rust. 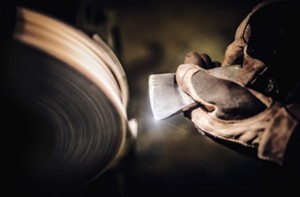 When the finishing of the forged axe head is done the heads are shafted. This is done by means of a vertically extending hydraulic press with a press force of about 1000 kg. 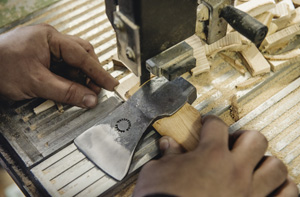 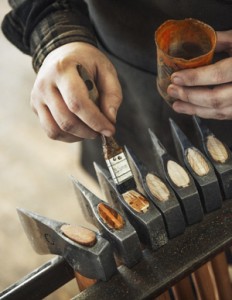 After shafting the axes are carefully checked and provided with a edge cover of vegetable tanned, chrome-free leather.